The Société owns and manages a number of significant archaeological sites around Jersey, you can learn about each of them below.

Thanks to Jeremy Percival for providing content for this page, have a look at his website Prehistoric Jersey for more sites and information. 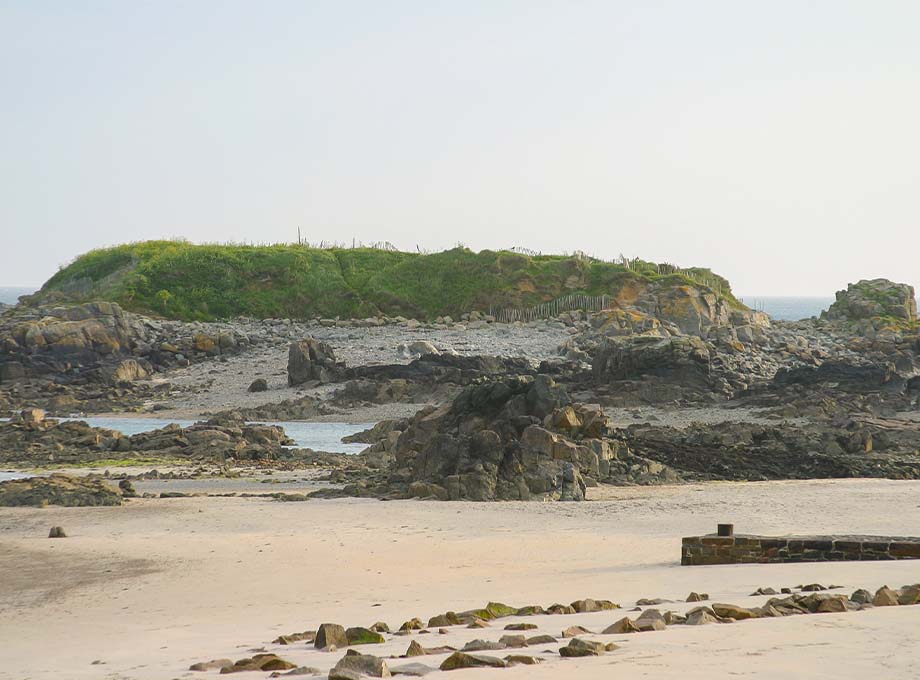 La Motte was a promontory up until the 17th century but is now an island being eroded by the sea. In 1911, a series of slab walled and capstoned cists were exposed at the site. Excavation between 1911 and 1914 revealed eighteen cists containing bone fragments and a few skeletons. A large cairn of diorite boulders was identified at the eastern end, and bone detritus was found in its centre. Finds spanned a long period and included flint flakes, bowls, vase supports, hammer stones and Iron Age material making the site difficult to date. Some of the cists have been reconstructed at the museum at La Hougue Bie. 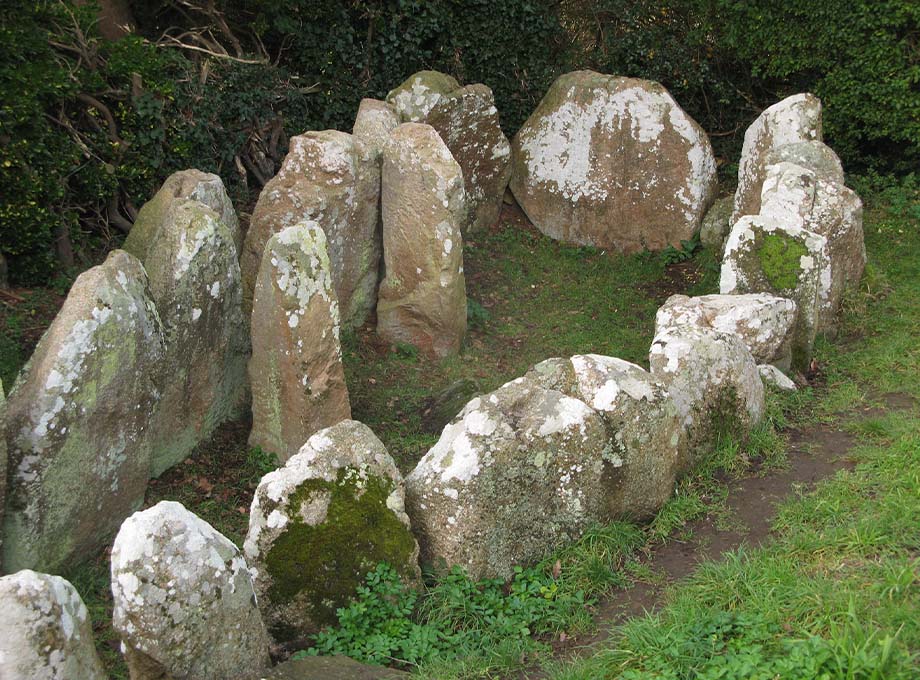 This passage grave was discovered in 1848 by workmen quarrying for stone. The passge leads into bottle shaped chamber that used to have four internal compartments each blocked with low stone slabs. The capstones were taken as well as all but one of the internal compartments. Within the passage stand three stones that may also have had a low sill at some time. These were later used to block of the passage so it could be used as a pigsty.

Finds recovered from the workmens spoil heaps included 10 or 12 pots, a Jersey bowl, vase supports, flint and stone tools, stone axes, polished stone pendants and a grape cup (unique to the Channel Islands). Burnt and unburnt human remains were noted in the cists. 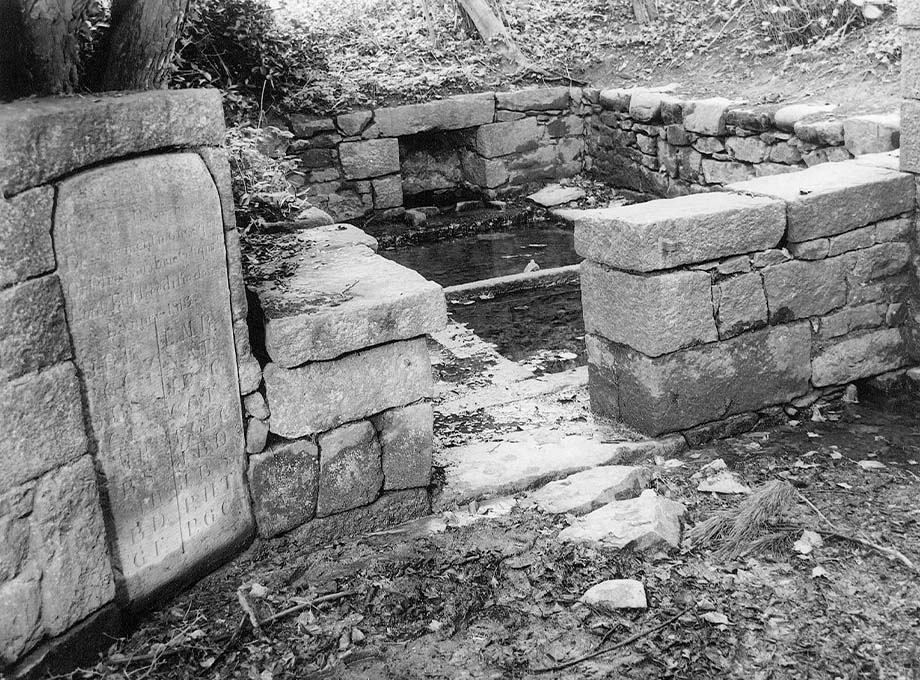 The Abreuvoir at St Cyr, St John, is a simple stone channel through which the stream has been diverted. Rights of usage were very important, especially to rural communities. Although Jersey is very fortunate to have many free-flowing streams, the Courts were often asked to deliver judgements as to whether, or not, individual properties had the right to use a particular Abreuvoir.

The Abreuvoir at St Cyr was not a public Abreuvoir. It is situated at the end of the short private lane which also leads to the Lavoir. Not all Abreuvoir are as closely associated with an adjoining Lavoir, some stand alone and, thanks to our Victorian forefathers, many are elaborate and imposing structures. 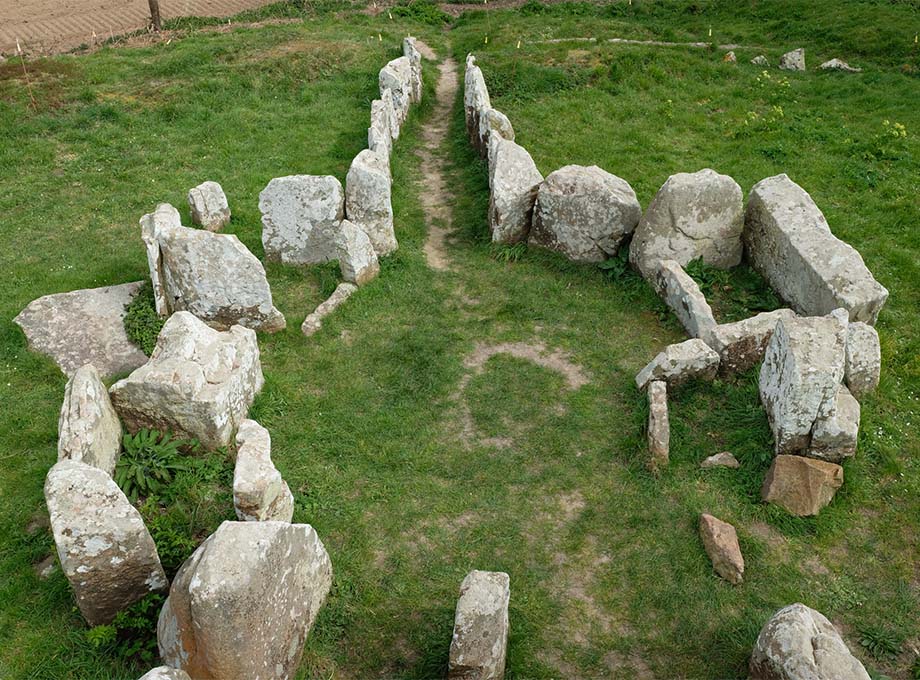 A 5m long passage leading in to a large circular chamber beyond which is a large capstoned end chamber. This capstone weighs approximately 24 tonnes and comes from a rhyolite outcrop 0.5km north of the site. Three small side chambers and two internal cists form the edges of the main chamber. The cists had capstones but it is unlikely that the passage and central area were ever roofed. The monument is surrounded by at least two drystone revetments and a ring of upright stones. When it was no longer in use the site was covered by a rubble mound leaving only the capstone exposed.

It was excavated in 1839, 1868 and in 1910 by the Société Jersiaise. Human bones from at least three adults and two children, one of which was a complete skeleton in a seated position in one of the side chambers were found as well as a three complete plain bowls, a small 'pigment cup', two vase supports (on which sat two of the bowls), flint tools, stone axes, rubbers, hammers, greenstone and dolerite pendants.

The dolmen is one of the two Jersey monuments aligned with the solar equinox. 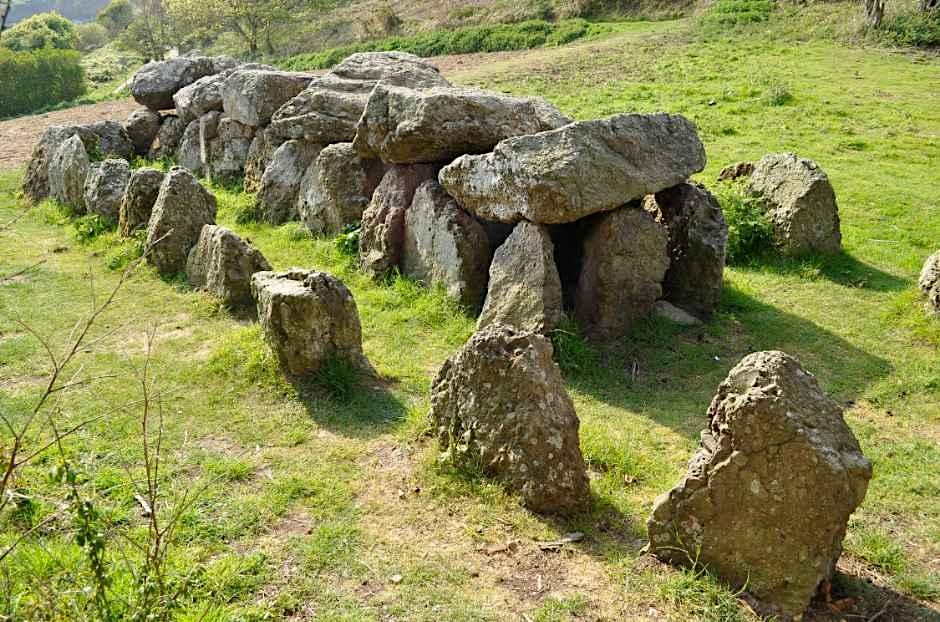 An 8m long, capstoned chamber surrounded by a ring of eighteen curb stones known as a 'peristalith'. Originally covered by a long mound what remains today is largely the work of restorers. When first excavated in 1868 the capstones had fallen into the chamber. These stones, including a porthole stone were lifted and placed as capstones. In 1919 the Société Jersiaise removed the porthole stone which had been incorrectly placed as a capstone and moved it to its current position at the eastern end of the chamber. Finds included a few flint flakes and pottery fragments.

In 2016 high winds caused the tree to the west of the site to split and fall on the western end of the dolmen dislodging the end capstone and one of the orthostats (see 3D model). 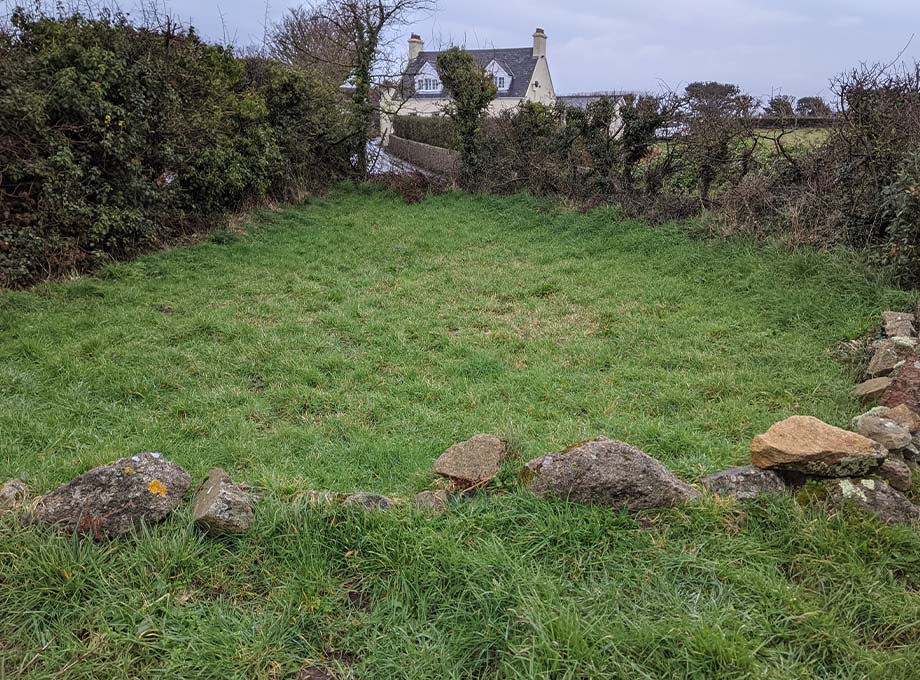 The site is a small triangular piece of land of less than one and half perches in extent, also known as Le Bigard, term that apply for several three-cornered enclosures of land in Jersey. It is located between the garden of Le Ménage ès Feuvres and the Rue des Landes, at the entrance of Le Grand Clos. It is a small roughly walled-in three-cornered enclosure made with dry stone technic (“à pierre secque” in Jèrriais, “en pierre sèche” in French). The name of the site suggests a sheep-pen where sheep would have been driven from the large field for selection and shearing purposes. 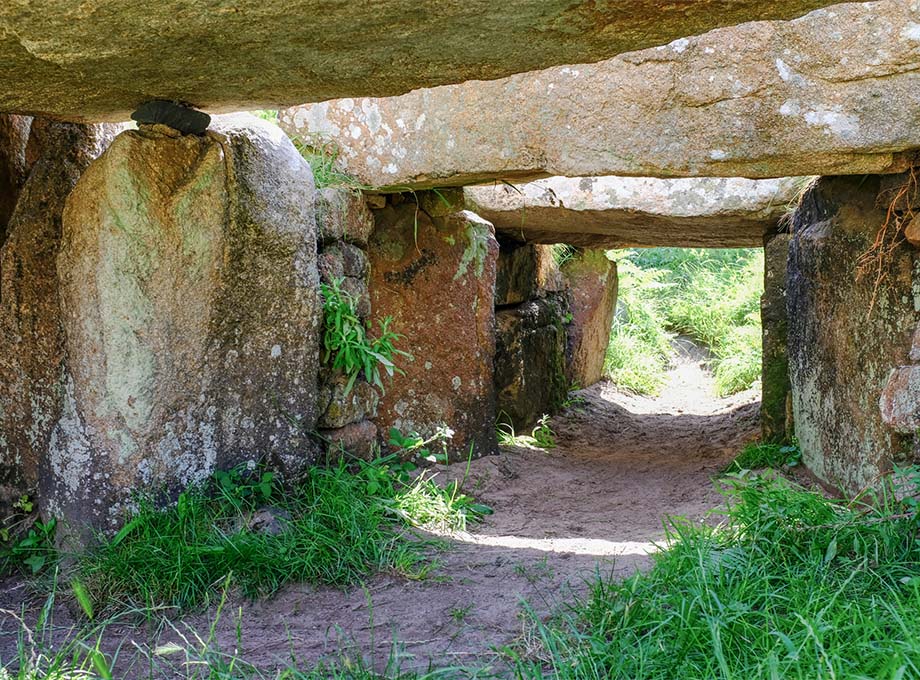 A fine passage chamber consisting of a passage of large, upright granite blocks and dry stone walling leading into an oval chamber. On the north side is a small side chamber. The passage and side chamber retain their capstones. Discovered in 1839 it was excavated in 1912 by the Société Jersiaise. The main chamber was found to contain the skeletons of six adults and one child, all lying on their sides in a crouched position with quantities of limpet shells, bones and teeth of cow, horse, sheep, pig and deer and colourful sea pebbles. A further skeleton was found in a seated position, propped up by stones in the entrance passage and the scattered remains of a ninth individual in the side chamber. Three round bottomed bowls, broken vase supports, a clay spindle whorl, stone rubbers, hammers, a fine flint pick and a steatite bead were also found. 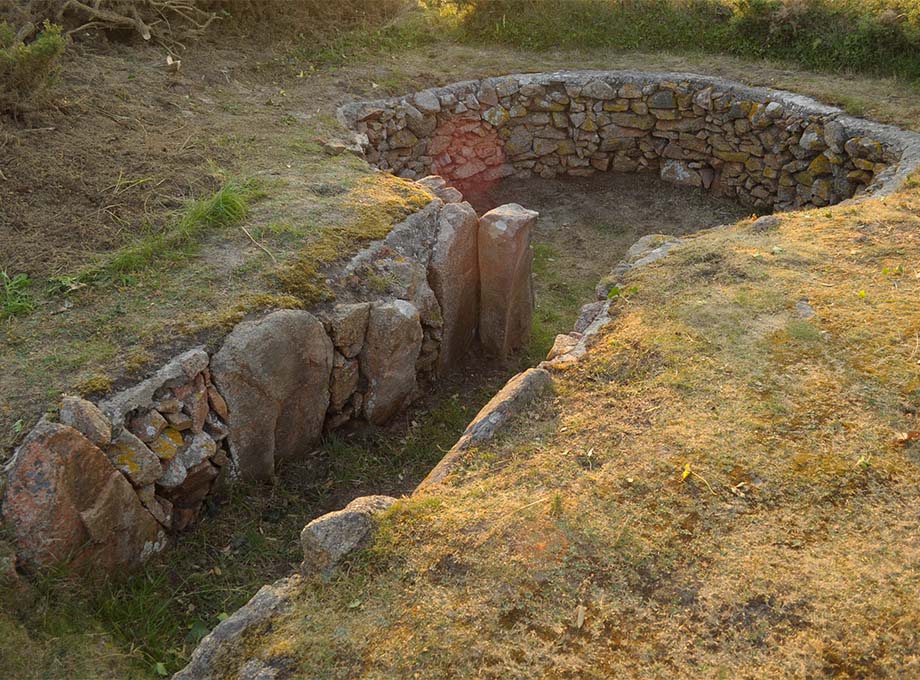 A paved passage leading into a circular chamber of diameter of 3.3m. The chamber walls are of dry stone construction and stand to a height of 75cm but originally would have risen to about 1.5m forming a vaulted roof. The fallen remains of this roof were found during excavtion in 1923. The chamber was paved with flat granite slabs except for a small partitioned off area on the west side.

Parts of four, round bottomed, early Neolithic bowls, a few flint chips and fragments of charcoal were recovered during excavation. Though the style is unique to the Channel Islands this simple tomb is very similar to examples found in Brittany and Normandy. 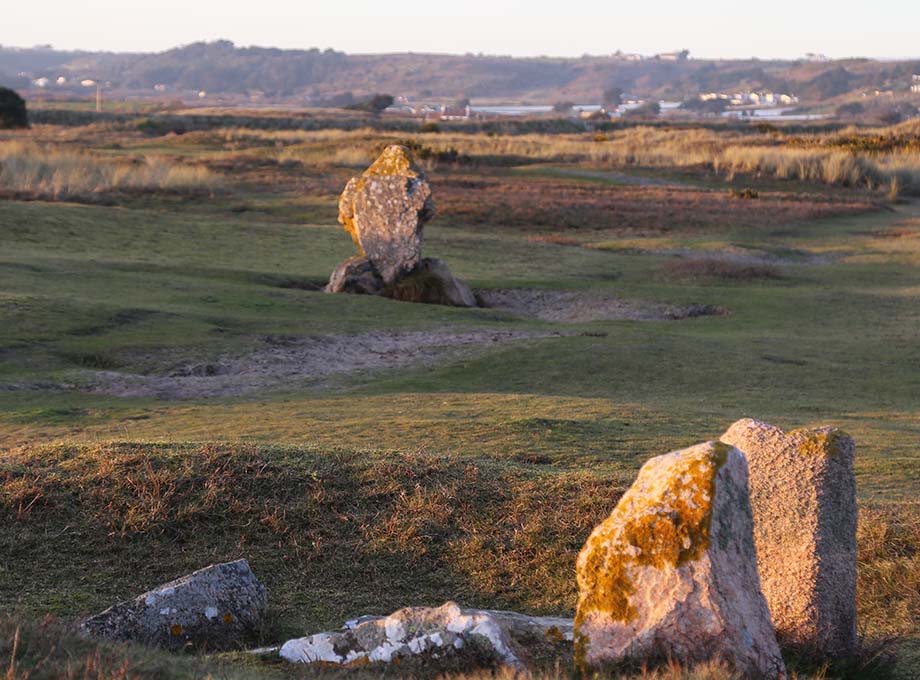 The Blanches Pierrs, or Blanches Banques, are composed of the several monuments: The Ossuary, a chalcolithic cist grave dated from the 3rd millennium BCE; three menhirs known as the Broken Menhir, the Little Menhir and the Great Menhir whose function remains unclear (ritual stones or boundary markers?), and La Tête des Quennevais, a ritual complex from the 3rd millennium BCE discovered in 1986 and overlooking the Ossuary.

The prehistoric land surface has been dated from the Neolithic and Chalcolithic period, but other finds testify human occupations until the Bronze Age and Gallo Roman period and even the Medieval times. 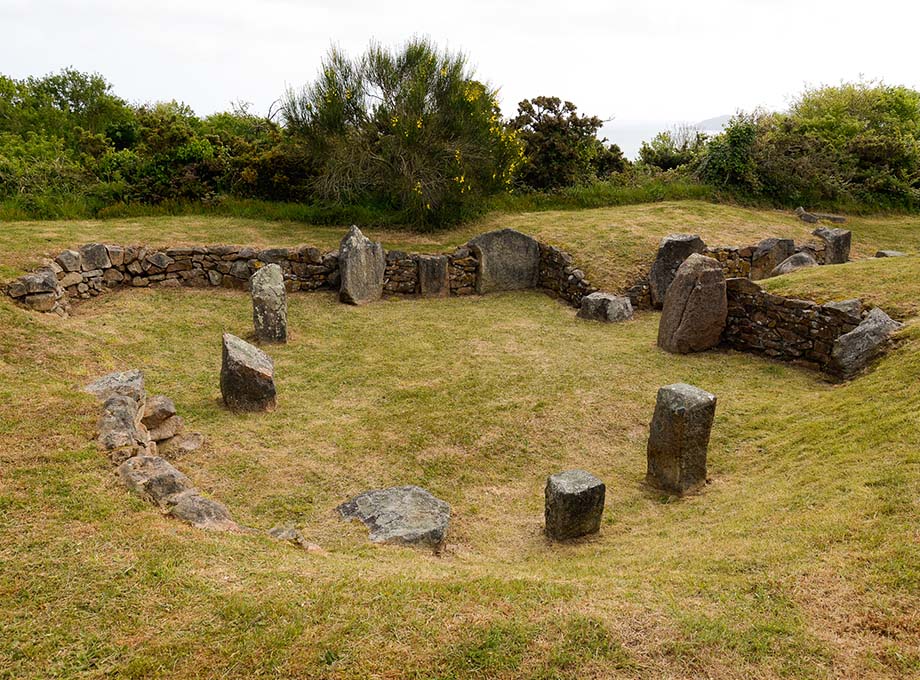 A passage chamber largely ruined by quarrying prior to the initial excavation in 1929, no capstone remain. At that time the chamber was found to have a paving of pebbles and a large quantity of pottery fragments were disguarded in the spoil heaps. Excavation between 1985 & 1990 revealed a chamber that was probably constructed in two phases. A D shaped chamber being built first and then later extended to its current form. In 1990 some of the main chamber's missing uprights were replaced by dated, modern grantite blocks. A vast number of finds included pottery, flint scrapers, arrowheads and broken querns. 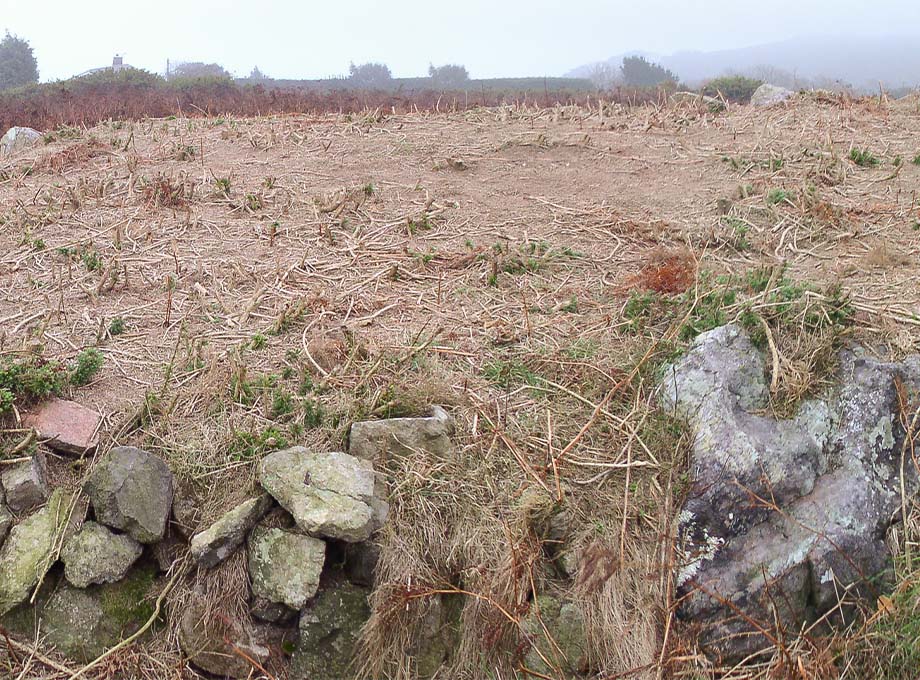 Les Houguillons, also known as La Hougue des Platons, dates from the late Neolithic or Chalcolithic (2850 – 2250BC). Originally a circular low mound 8.4m in diameter. When excavated in 1914 and again in 1936 a capstoned cist was found under a mound of fine clay within a stone circle. In the cist were two urns resting on a bed of charcoal. The larger of these contained cremated human remains thought to be that of a woman and child. The cist was removed for safe keeping and can now be seen at the museum at La Hougue Bie as can the large urn. The small urn can be seen in Jersey Museum. 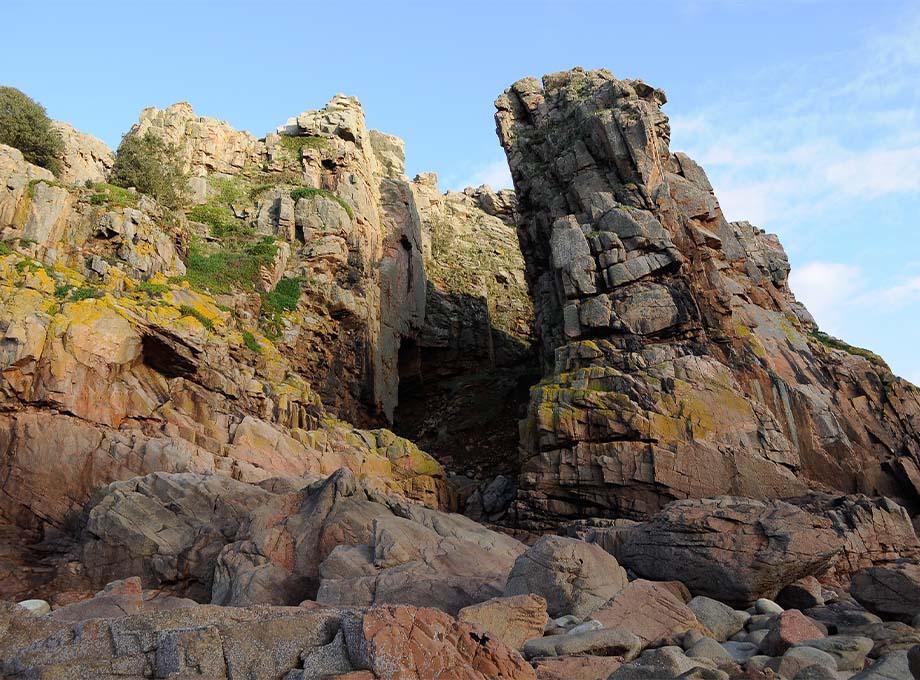 A natural arch in the granite cliff that has been used as a shelter since Palaeolithic times when St Brelade's Bay was a lowland plain. Excavation of the deposits in the shelter shown it to have been used between 250,000 and 33,000 years ago. The bones of mammoth and rhinoceros were discovered as well as lower and middle Palaeolithic flints.